Had a great time with family this New Year’s Eve. We sang Karaoke– badly. Very badly. But it was a blast to hear all those old songs from the seventies and mostly eighties. And thank goodness we were inside my home and not out in public!

The list goes on and the 70s list is even longer. My family is never allowed to sing Bohemian Rhapsody ever again.

Here are some pictures for your enjoyment. And right now I’m listening to the FOO FIGHTERS! Official Foo Fighters

What I did most of the night. Eat.

My sister after she heard me sing A Ha’s Take on Me. I’m so sorry. Not. You should have heard HER version of Radar Love.

She recovered. She has a thing for Mentos commercials.

The words on the screen had just been: I asked your doctor. I’ve got your picture. I’d like a million of them all to myself. Now: … And turning down. And turning in. And turning ’round. Can you guess the 80s song?

My sisters and me. Uh, the one in the chair was tired. So we tried again.

Uh, still no. So we thought we’d just let her rest and catch her later. 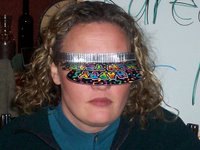 So, I just sat and stared at her.

So did my cat.