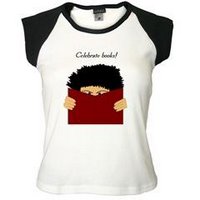 This is one of the t-shirts I designed to Celebrate Books! It’s at The Write Snark : CafePress.com.

I’ve been writing on and off for fourteen years. More if I count all the melodramatic poetry and horrendous re-dramatizations of my favorite romance novels in my teens.

I was twelve or thirteen when I discovered romances. A voracious reader, I had gone through most of the elementary library by the time I reached the fourth grade. I started writing my own versions of stories that year as well. I would read anything I could get my hands on from cereal boxes to encyclopedias.

When I was twelve, my family was living deep in the Ozark Mountains. We’d been there close to a year and I still hadn’t adjusted. Being pulled from my school and friends in Oklahoma had been hard, but the contrast of our former life with the commune living in remote woods left me pretty mixed up. To this day, I can still feel the loneliness of that time. While the commune thing did end badly (Even at twelve, I realized there were too many egos involved.) there was a lady there I liked. She found me wandering around with nothing to do and gave me a box of old books.
These books started me on a journey of adventure, excitement and love. They weren’t the children’s books or young adult books I was used to. These were new. Different. And they had all the drama a pubescent female writer could ever hope for. (grin)

There was a small book of Edgar Allen Poe stories printed in the 1800s. I still have that. There were Shakespeare plays. But it was a big box and it held mostly Harlequin Present novels. I didn’t pick those up right away, but I’ll never forget the day I did. I was upset about something — remember the pubescent thing? — and I had an entire weekend ahead of me with nothing to do.

I picked up Living with Adam by Anne Mather.

I didn’t move for two hours. I read the entire thing through with this catch in my chest and I sat there, stunned. Then I read it again. I lived and breathed every moment of drama and excitement in that book right along with the heroine. She was young and innocent and the man was older and… her stepbrother! He’d never lived in the same house, they were close to strangers, but the age difference and slim family connection made them fight what they felt. When they finally gave in, I think I held my breath for the rest of the book. It was an innocent book with a firmly closed bedroom door, but oh, the romance of it all enchanted me like nothing had.

That weekend and in the months ahead, I did everything fast. Raced through dishes and homework so I could get back to that box of books. And other boxes. I discovered used bookstores where I could buy the books for a quarter each and I discovered Nora Roberts and Carol Mortimer and so many other favorites. Yes, I bought them used. I was a kid and babysitting money went fast. But those used bookstores created a fan who would grow up to spend more money than she wants to know on these books new. A fan who decided this was something she wanted to do herself.

I changed my writing style many times over the years and it no longer has any resemblance to the Harlequin Presents of old. My taste in books has changed as well. With age comes change. Sometimes I’ll pick up those old books and end up annoyed with the domineering, butthead of a hero — so popular then. But mostly, they make me smile. They can still pull me back to a time when I dreamed of everlasting love and all the wonderful possibilities of a life spent with someone who would do anything for you.

I lost that first book in one of the countless later moves and I spent years exploring used bookstores looking for it. My husband, tugged along on so many of those searches, was in a friend’s house helping with a garage sale. When the woman said the attic was full of old romance novels she wanted to add, he asked to look through them. He found that book for me.

Outside of his love and our children, it is still the most romantic gift he’s given me.

You know, I think I’ll go look for that book right now. 🙂

Uncategorized
Will be Getting Back
Today is About Fun!