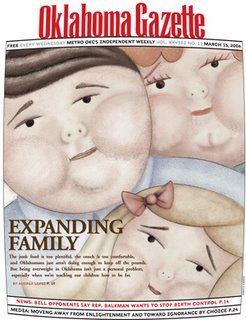 My eyes have been hurting, so I’ve been offline more than usual and reading a lot less which leaves me feeling… off. I even read while watching TV. I’m thinking going from computer screen all day to book and TV at night has worn out the eyes a bit. This has caused a two week headache that has kicked my butt. So, I’m off to the doc today to see what’s going on.

But last night, I did read my favorite local paper, the Oklahoma Gazette, and couldn’t believe it. First of all The Czars (from Denver) are playing here. In Oklahoma. Sunday night at the Opolis in Norman. And I have plans!!!!!! Describing this band is a challenge. Intelligent, mellow, melodic and just plain lovely. On their website, it says “From shuffling west coast pop and crashing electronica to alt-country and delicate ballads, Denver’s The Czars sound like no other band. “ This is true. I can’t give you a a comparison. The lead singer, John Grant, has the most smooth, fantastic voice. I heard them do a cover of For Emily and it raised the hair on my arms.

I’ve been buying CDs from Bella Union Bella Union News for years and learned they just recently started US distribution. This is a very good thing. Yeah, I paid extra shipping for my Bella Union CDS– good music is worth it and Bella Union has some of the best. My favorite Czars CD is Before… But Longer. Amazon.com: Before…But Longer: Music: Czars That’s where I first heard Dave’s Dream. The harmonies on that song are beautiful. You can hear a sample at Amazon. I also love Ugly People v. Beautiful People, MP3 Album Music Download at eMusic You can listen to 30 second samples on this site.

Also in the Gazette was a write up for the Electro Lounge. I’m excited! They want to be known for having the best jukebox in OKC. Sorry, but that won’t be hard. And get this… it will be loaded with obscure “good” bands who haven’t broken into mainstream. Could this be more tailor made for me? Some of their lineup will include The Sex Pistols (not really obscure, IMO), Blur, Starlight Mints and Morcheeba.

I’ve lived outside Oklahoma and Morcheeba is not obscure in places where they have “good” radio. Don’t mean to put down the area, but our radio choices are seriously lacking. I own all the Morcheeba CDs. Very good band. Bryan Neel, the owner, wants to get the music scene here hopping. He’s talking about getting another indie rock radio station going. I’ll help. We need one.

And don’t know how many of you know, but Nine Inch Nails will be here on the 28th!

Uncategorized
Interrupting This Program for Something Weird
Migraines