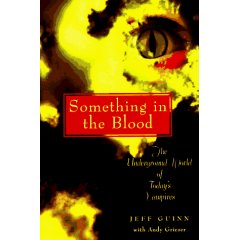 Amazon.com: Something in the Blood: The Underground World of Today’s Vampires:

This is the book the cashier said only women buy. All you have to do is walk into a bookstore, hit the romance section and you’ll see a plethora of novels about vampires. Written by women for women. Women and yes, some men, find the myth of vampires fascinating.

I don’t know if it’s the dark, seductive power or the immortality that attracts them. Probably a little of both. For me, it was always the immortality. (Okay, that dark, seductive thing is kind of cool– if you can get past the bloodsucking. Ew.) After all, death is the ultimate, unsolvable mystery. I can read as many books as I want on every religion and subject known to man, but I really and truly don’t know what happens when we die. No one does. They might have had a near death experience… but that experience is that person’s perspective or possibly what they expected to see. The Light.

Anyway, I’m off for more stupid medical tests so I don’t have time to really go into the subject of vampires like I would prefer. I’m only a little way into the book, so I don’t have a good review written up, but so far, the research on Bram Stoker and Anne Rice is interesting. I’ve read one chapter interviewing a young woman who lived what she calls “the life” for awhile and now publishes a newsletter about the world of vampires or people who still live “the life” of vampires.

Personally, the thought of drinking blood makes me ill. Ick. But what fascinates me about this book so far is the real belief some people have for a creature that was made up by a writer a long time ago.

I read Interview with a Vampire by Anne Rice and loved it. I didn’t get the urge to go snacking on anyone afterward, but hey, I prefer things like chocolate or Kettle Korn. I will admit to a small slightly goth period in highschool, but not really. I dressed like a teacher but I did paint a small black cross on my eyelid for a few months. Mostly to see how many people noticed. heh heh

So, the winners are Doc-T and Rachel– though technically Rachel picked two. I probably would have as well, so I’m going to let her win too. (g) So, you two get to think up two interesting topics for me to write about here on The Write Snark. No rules– any topic goes.

I won’t be online until later today but believe me, I look forward to seeing these topics. (g)