I’m excited and nervous about this one. Revisions are done and it’s off to copy edits. Comes out July 14th this year! How about a surprise excerpt? 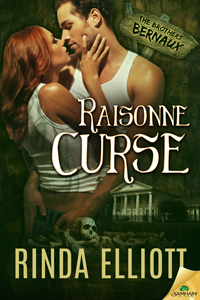 She felt eyes on her and looked down to find a Siberian husky sitting in the doorway. Poor thing looked like he’d been through hell, was covered in scars and missing a tail. He also had two different colored eyes. One brown, one ice blue.

A blue T-shirt appeared in the doorway, followed by the smile she was beginning to think might be a big part of this magic he was supposed to wield so well. She managed to repress the shiver of awareness it caused as she reached for the shirt. “Thanks.” Smirking, she clutched it to her body and eyed the dog Pryor had named nub. She was such a sucker for a sense of humor.

“While you change, I’ll get us some iced tea. Just turn left and follow the hall all the way. It spills into the kitchen.”

She nodded, watched the door close, then eyed the sweaty bra she’d pulled off with her shirt, shuddering at the thought of putting it back on. Her top had soaked up enough blood to transfer it to the white back strap. Hoping his shirt would be roomy enough to hide the fact she wore no bra, she hurriedly pulled the T-shirt on. The short sleeves hit her mid elbow and the shoulders sagged an inch or two below her own, but it was soft, dry, and it smelled good. Like morning sunshine.

After splashing a little cold water on her face, she stuffed her bra into her short’s pocket, and followed his directions. She slowly walked the hall, taking in the family photographs that covered every available surface.

Quite a few were black and white, and after about ten feet, she stopped and stepped close to peer at the small photos. Looked like every generation had three brothers and in each full family portrait, there was a brother who looked eerily like Pryor. A knot formed in her chest, and she put her hand under her breast, trying to calm the sudden eerie awareness that she stood in a house with more history, and from the expressions on their faces, more family suffering, than seemed fair.

“That was our father.”

Elita jumped when Pryor’s hand moved past her head to point to the man she’d been staring at. “He looks just like you.”

“Wait until you meet Mercer and Wyatt. They look like our uncles. In every generation, there have been three boys born to one brother.”

“You must have strong family genes.” She turned toward him, accepted the tall, cold glass of iced tea.

“So, where’s the rest of your family then?” She waved a hand over the walls. “With this many people and this big house, I would have expected a houseful.”

This time, he didn’t grin, just offered a small, sad smile, one that tore into her heart because it reminded her so much of her Ma’man’s expression when she was thinking of her daughters.

“We have a few cousins left but they moved away from the area years ago. The rest haven’t made it through various disasters—health and weather. It’s just Mercer, Wyatt and me now. I’m here most of the time. They run their businesses from here, but go out of town once a month.”

“So you stay here and paint the outside of the house?”

“That and a few other things.”

She sipped the tea, smiled when she found it didn’t taste like the usual sugar water tea folks preferred around here. It was lightly sweet, just the way she liked it. She switched the glass to her other hand and wiped the now wet one on her shorts. “So you don’t want to wait for your brothers to try and break this curse?”

He shook his head. “We’ll try one on our own, but it’s possible it won’t work without them.”

“Thank you. For helping me.” She crossed her fingers behind her thigh before sending out a silent wish that her accidents didn’t hurt this gorgeous old home or the even more striking man about to help her.

“You’re welcome. Come into the kitchen.” He suddenly chuckled, a low sexy sound that made her shiver.

He threw her a heavy-lidded glance over his tattooed shoulder. “Yeah. First.”