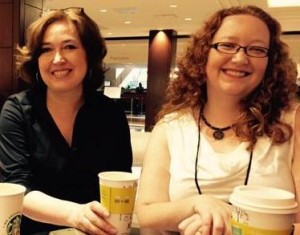 If you like big suspenseful m/m romance novels, I’m doing a new project with a new co-writer.

Jocelynn Drake is a wonderfully talented, NYT Bestselling author of urban fantasy and we met briefly years ago at a Romance Writers of America conference. But we didn’t click until later. She read my Dani Worth Kithran stories and loved them as much as I do. I don’t have a huge audience for those and to hear that someone enjoyed them so much meant a lot to me. They are what you’d call a part of a niche genre…or genres. LGBT, erotic, menage, and space opera. LOL. So we became friends. I later introduced her to my favorite contemporary m/m romance series (Abigail Roux’s Cut and Run) then some of my other favorites in that genre and she was hooked, too. We decided to do a fun project together and then met in person again this year at the Romantic Times Convention. We ended up spending most of the trip working.

We’re both so excited about our new series and will have news soon. In the meantime, you can keep up with us in several places.

Our Tumblr-   This is going to be a pretty sexy Tumblr. We’re posting images of characters and places that inspire our series.